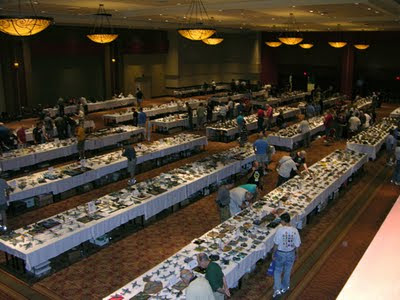 Hi Guys,
Its been awhile. Is there anyboy left out there?
The Nationals, for us in the cottage industry, are kind of like the Christmas rush for retailers. Its a time to hunker down and do everything you can to be ready for the onslaught of modelers with money burning a hole in their pockets.
The IPMS USA National Convention was held in in Columbus, Ohio this year from August 19th through the 23rd. With the current state of the economy, I was not expecting much from this show. Posts on various discussion groups about modellers cancelling at the last minute seemed to point to a quiet venue.
Nothing could be further from the truth. That's a strange statement. LOTS of things could be further from the truth. Politicians always have your best interests in mind. Hot chicks are turned on by guys who build models. You get my point. The show was jumping. Maybe jumping is not a good word for it. Some of these guys look like they haven't jumped since the Carter administration! Seriously, a great turnout, which was a very pleasant surprise. Despite some cancellations, all vendors tables were filled. Attendance was high, and guys were spending money, despite the tough times.
All in all, a great show. While there were a few hiccups, nothing ever goes perfectly, and the IPMS Columbus guys deserve a big thank you for hosting a great event. The model turnout, while not record breaking, was pretty impressive, with 2,525 model in the competition. Those kinds of numbers are what make the IPMS Nats the largest model contest in the world. While Scale Modelworld in the UK (BarracudaCals will be in attendance as a vendor again this year) is a considerably larger show, owing to the vast number of vendors and club display tables, their competition area is much smaller. They are both amazing shows, and you owe it to yourself to attend both at least once in your lifetime.
The above photo of the model room, taken by my good friend Lee Coll, illustrates two things: First, the vast quantity of models on display, and second, the somewhat... ahhh.. romantic lighting in the hall. It was one of the few disappointing aspects of the show. The lighting in the model room was poor. I mean bad. How could a convention center have such crappy lighting for a main room? It made judging very challenging, to put it tactfully.
More later. I am back. I have recovered from my trip at last. It took me almost 5 days to feel human again. It was a fun show, and I will post more images and recount some fascinating tales later today.
Happy modelling! Roy
Posted by ROY SUTHERLAND at 10:39 AM 0 comments

ROY SUTHERLAND
I have been a modeler since the age of 6, and a professional modelmaker for the last 24 years. I have worked in a number of model shops in the SF bay area, including Industrial Light and Magic (credits include Star Wars Episode II), and M5 Studios (where they film Mythbusters). I have worked for Toy Companies such as Worlds of Wonder, Galoob, and 21st Century Toys, where I was in charge of the development of the entire product line. Most recently, I have done some contract work at Image Movers Digital, Kerner Optical, and Fonco, as well as running Barracuda Studios, which produce the decal line BarracudaCals, the resin line BarracudaCast, and the publication line BarracudaGraphs.